Cancer is a condition which is very complicated at the level of anatomy, physiology, biochemistry and pathological expression. Cervical cancer develops in the cervix which is the entrance to the uterus from vagina in the female reproductive system. Cervical cancers are believed to be linked with infection of Human Papilloma Viruses (HPV). It most commonly spreads through sexual contact. In maximum cases the infection resolves and causes no symptoms. But if the infection persists it can lead a woman towards cervical cancer. Cervical cancer is believed to be the fourth most common infection in females. This is the most successfully treatable form of cancer, if it is diagnosed in early stages.

The cervix is a cylindrical shaped neck made up of tissues that act as a bridge between vagina and uterus. The cervix is located at the lowermost portion of the uterus and `is composed of fibro muscular tissue. Parts of cervix include ectocervix and endocervix. Ectocervix is understood as the part of the cervix lying inside which is usually a visualized vagina. The opening at the center of ectocervix is called endocervix. This endocervix is often called an external os. External os opens to allow passage between the uterus and vagina. Endocervix is usually understood as a tunnel through the cervix, from the external os into the uterus. These both parts of the cervix have an overlapping border which is known as the transformation zone. In Ayurveda every cancerous formation is understood as arbuda. Acharya Sushruta has explained arbuda in detail. According to Sushruta arbuda can occur at any site or tissue of the body. 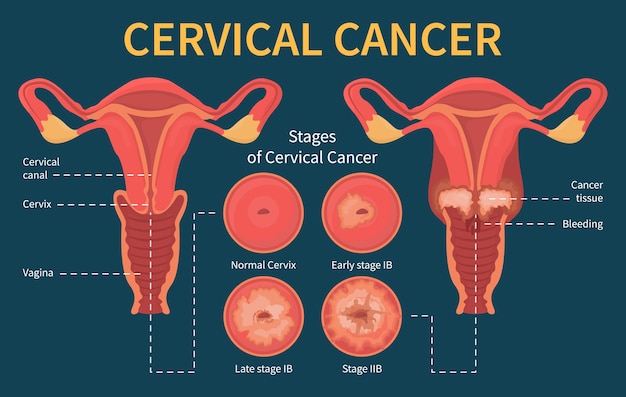 In this type of cancer the cancerous growth begins with thin, flat cells which are lining the outer part of the cervix. Most of the cervical carcinoma involves squamous cells.

This type of carcinoma starts in the mucus producing gland cells. The cervix has column shaped glandular cells which are present on the inside layer of the cervix to the uterus. It has become more common in the last few years.

In this type both squamous cells and mucus producing glands are involved. Ayurveda explains the type of arbuda as following:

Ayurveda explains the occurrence of arbuda due to increased kapha dosha and medo dhatu (fatty tissue). In modern science cervical cancer typically is the result of human papillomaviruses infection for a long time. But may also include other factors like smoking, drinking in excess, not maintaining a god hygiene, reflex back of menstrual blood, multiple sex partners, long standing sexually transmitted diseases, menopause (as many hormonal changes are observed), obesity etc.

Ayurveda explains symptoms in arbuda as

Ayurveda is a branch of ancient science which is having a lot of things hidden inside of it. All you need to do is search and find the suitable information. In cervical cancer many of our Ayurvedic herbs are used to alleviate chemotherapy induced side effects, promote body strength to fight against the condition, promote quality and add vitality to life. These herbs include:

Ashwagandha, which is called as king of herbs and is very well known for its body strengthening effects. Withaferin compound in this drug is known to prevent chemotherapy induced neutropenia. It also improves quality of patient life by reducing fatigue and other side effects due to chemotherapy.

It is known to enhance body metabolism and has an anti inflammatory effect. It helps in boosting digestion which is very helpful in absorption of oral drugs used in chemotherapy. Curcumin also acts as an antioxidant and protects body cells from free radical damage. It also reduces risk of metastasis (spread of cancer cells to healthy tissues or cells of other organs via bloodstream or lymph nodes) and also can prove beneficial in relieving pain in cases of cervical cancer.

This is a classical herbal formulation which can play a very important role in supporting cancer patients. The main constituents of this formulation are kachnar bark (Bauhinia variegata), amalaki (Emblica officinalis), bibhitaki (Terminalia bellerica), haritaki (Terminalia chebula) and many more. Kachnar bark extract is having cytotoxic property. It also has a chemoprevention effect and protects the patient's body from excessive side effects of chemotherapy drugs. It also has anti tumor effects and it might play some role in dissolving the cancerous tumor. Triphala (amalaki, bibhitaki and haritaki) is known to have anticancer properties. It helps in reducing proliferation (multiplication of cancerous cells to produce more of its kind) of cancerous cells.

Tulsi is known to have many properties but in cervical cancer patients it can be used as antioxidant and also helps in slowing the progression of cancerous condition. Cancer is a condition which generally occurs due to accumulation of free radicals in the body. When something acts to eliminate these accumulated free radicals then it is called an antioxidant. Intake of such antioxidants in cancer patients usually prevents metastasis (damage by metastasis is not reversible).

Guggulsterone is a gum extracted from the tree Commiphora wightii. This extract is used from centuries in various herbal preparation and works as an analgesic, used in liver, urinary and many more disorders. Sterone is proved to have cancer preventive properties and also is used in case of metastasis.

This classical formulation is used for treating many conditions from centuries. In cancerous conditions it can be used as an anti inflammatory agent and thus can help in edema reduction.

Cancer is a condition that is not only painful for patients but also for their relatives. The patients near and dear ones see them suffering day by day, week by week growing weaker and weaker and what they can do is nothing. It feels like they are forced to watch and let everything slip from their hands like sand from a fist. But aforesaid Ayurvedic herbs and formulations can be used in managing all types of cancer. In case of any query kindly visit www.planetayurveda.com.

DR. Vikram Chauhan, MD - AYURVEDA is an expert Ayurvedic practitioner based in Chandigarh, India and doing his practice in Mohali, India. He is spreading the knowledge of Ayurveda Ancient healing treatment, not only in India but also abroad. He is the CEO and Founder of Planet Ayurveda Products, Pla

Comments on Management of Cervix Cancer in Ayurveda

A Biased View of Construction & Equipment Insurance in TexasIn that case, this is where tools and devices...

Get This Report about Professional Liability Insurance - Thimble Insurance

The 7-Minute Rule for Commercial Real Estate : Find Your Next Property - Coldwell